Take a look at college football's oldest rivalries by division 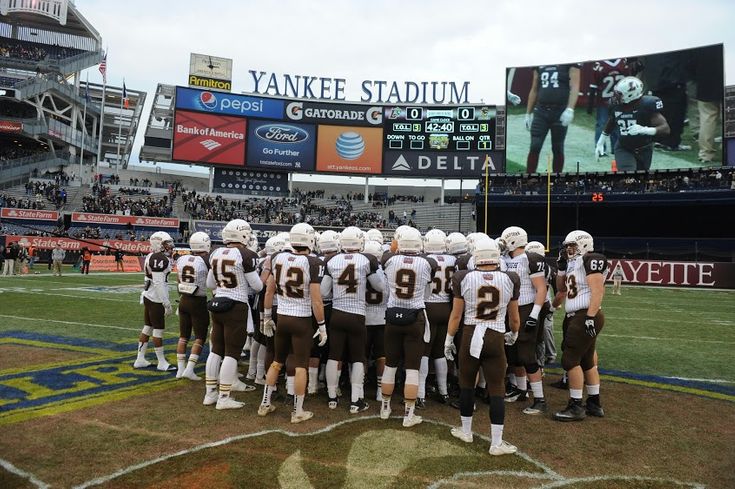 Lafayette College's football team huddles at its game against longtime rival Lehigh in 2014 at Yankee Stadium. (Photo via Lafayette Athletics)

On November 6, 1869, history was made and the sports landscape was forever changed. On a field off College Avenue in New Brunswick, New Jersey, the first college football game was played. Playing under a hybridized set of rugby rules, the Rutgers University Queensmen (now the Scarlet Knights) defeated the New Jersey (now Princeton University) Tigers by a score of 6-4.

In the nearly 150 years since that momentous game, countless others have been played. Since that first game, rivalries have developed. Whether distance, history or frequency created the rivalries, they're a big part of what has made college football great. They bring out passion in the players, the coaches and the fans.

Some programs have clashed on the field well over 100 times and have bred generations of fans celebrating victories and mourning defeats. As we inch closer to the upcoming season, here are the oldest rivalries in college football.

Oldest Rivalry in FBS: Michigan vs. Notre Dame
The Wolverines and the Fighting Irish first met on the field in 1887. The Maize and Blue won 8-0 in that first game and hold a 24-16-1 all-time record in the game. They haven’t played continuously, but will renew their rivalry this season with a Sept. 1 matchup in South Bend.

Oldest Rivalry in FCS: Princeton vs. Yale
The Tigers and Bulldogs have the oldest rivalry, with the first clash taking place in 1873. Three of the Ivy League's four Heisman Trophy winners have taken part in this game: Clint Frank and Larry Kelleyfor Yale and Dick Kazmaier for Princeton.

Oldest Rivalry in NCAA Division II: Johnson C. Smith vs. Livingstone
The Golden Bulls and the Blue Bears have been playing in the Commemorative Classic dating to 1892. The schools (Johnson C. Smith was then known as Biddle College) played on a snowy day two days after Christmas in Salisbury, North Carolina in 1892 in a game that is credited as being the birth of black college football.

Oldest Rivalry in NCAA Division III: Amherst vs. Williams
Dubbed the “Biggest Little Game in America,” the Mastodons and Ephs first took the field against one another in 1884. Williams won the first game 15-2 and a great rivalry began that day. The contest has grown to such proportions over the years that ESPN’s College GameDaywas on site for the game in 2007.

Oldest Continuous Rivalry: Lafayette vs. Lehigh
The game is known nationwide simply as “The Rivalry.” The Leopards and the Mountain Hawks have met an astounding 153 times heading into the 2018 season. The historic 150th meeting in 2014 was held at Yankee Stadium. The only year a game did not take place was 1896 after a dispute over a player’s eligibility.