How Washington has snuffed out the Air Raid 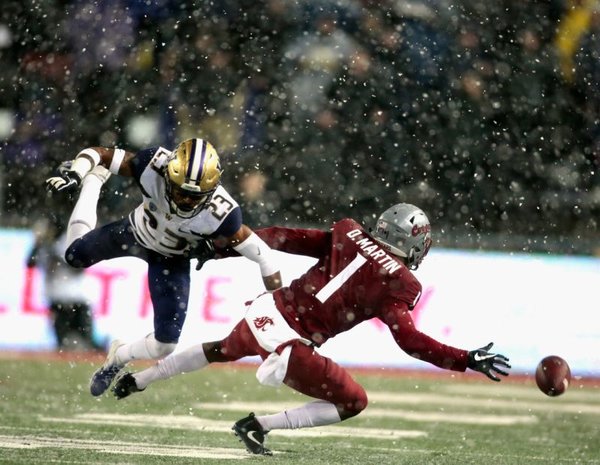 When Mike Leach left the sun scorched heat of Lubbock, Texas for the sleepy, rolling hills of Pullman, Washington, he brought along his trusted sidekick: The Air Raid offense. Washington State was in dire straits. Leach, one of the founders of the Air Raid offense, had a bumpy start in his effort to turn things around at his new school but has since brought life and energy to Washington State. 12 wins in his first 3 years has become 36 wins in his last 4 years-- quite the turnaround.

But alas, Leach hasn’t quite gotten over one last hump: The University of Washington. Chris Petersen inherited a UW program that was just as bad and has turned it into a national power. The Huskies went 0-12 in 2008 under Tyrone Willingham. The team’s next hire, Steve Sarkisian, mustered, at best, an 8-4 record before he was ousted after 5 seasons. Petersen was hired in 2014 and has brought 3 straight double-digit win seasons in the last 3 years to Seattle.

As Leach has turned the program in Pullman around, his team and his high-flying offense was stopped in its tracks in their last game of season, every year. The Washington Huskies have become the Air Raid killer. According to S&P+’s offensive percentile performance stat, the last Apple Cups have resulted in Leach’s offense posting dreadful 33%, 55%, 42% and 35% scores.

The Pacific Northwest’s version of the Air Raid’s bogeyman is the Washington defense and they’ve done it simply by owning the trenches. The big school in Seattle has historically out recruited Wazzu and in recent years have had some elite players play on their defensive line.

What this means is that when they want to only rush 3 players, a tactic heavily employed by a lot of teams facing Air Raid offenses, they can still expect to get to the quarterback.

From their base Tite front, Washington will pass rush with their two 4-techique defensive ends and 0-technique nose. 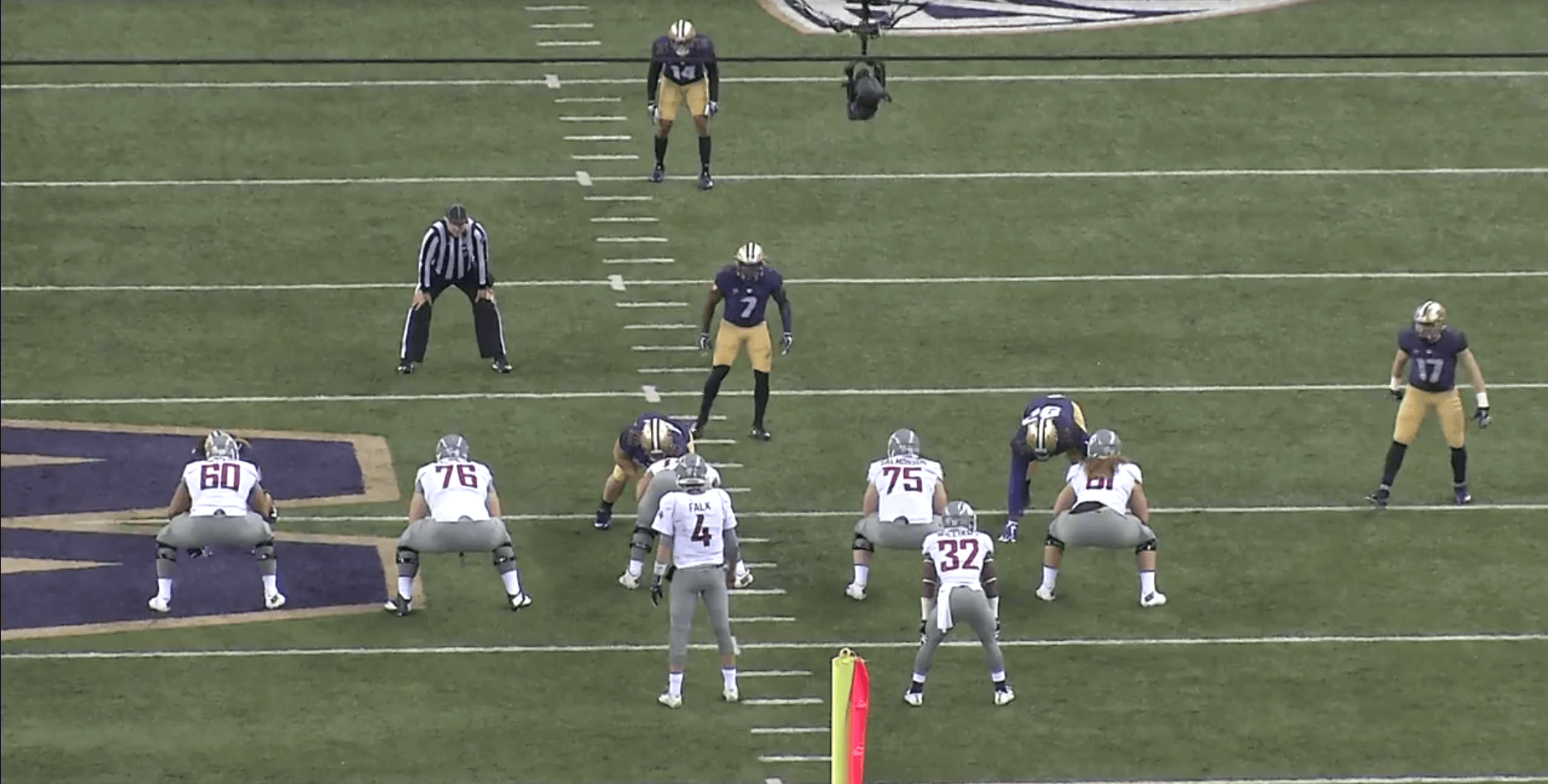 In coverage, what UW wants to do is drop 8 guys into zone, get depth, and play all the shallow crossing patterns in front of them. The Huskies know Leach loves his “mesh” series so instead of running with the crossers in man coverage and getting picked (like Michigan tried to do against Ohio State), they sit back, take away the deeper routes and rally down to make the tackle underneath. 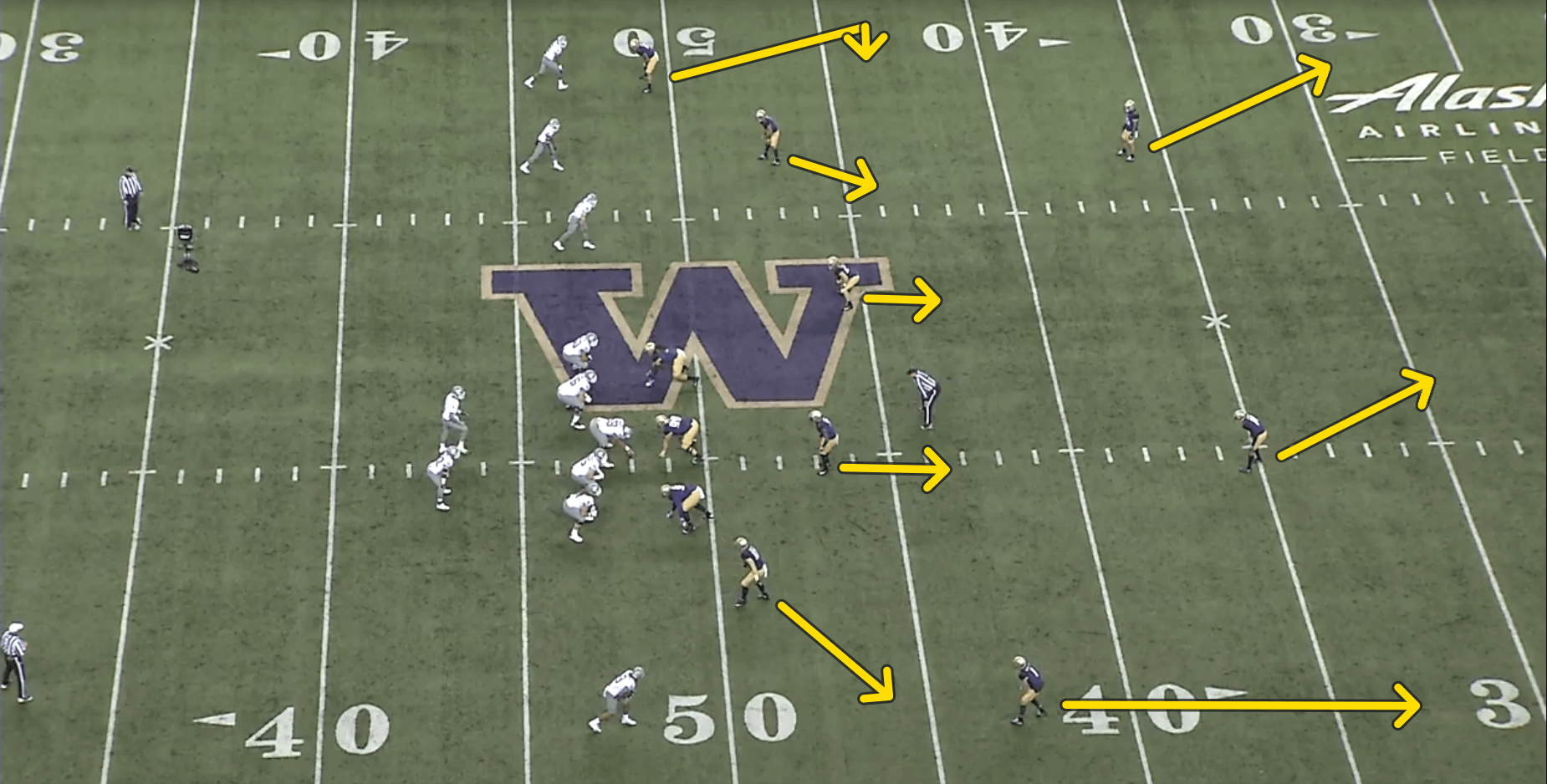 Washington State quarterbacks have had enormous trouble with this coverage. In the image above, from a 2-high look, they roll back to Cover 3. Against trips, they wanted to keep 3 low defenders against the 3-trips receivers and still have a safety over the top.

Against “doubles” the coverage was similar: 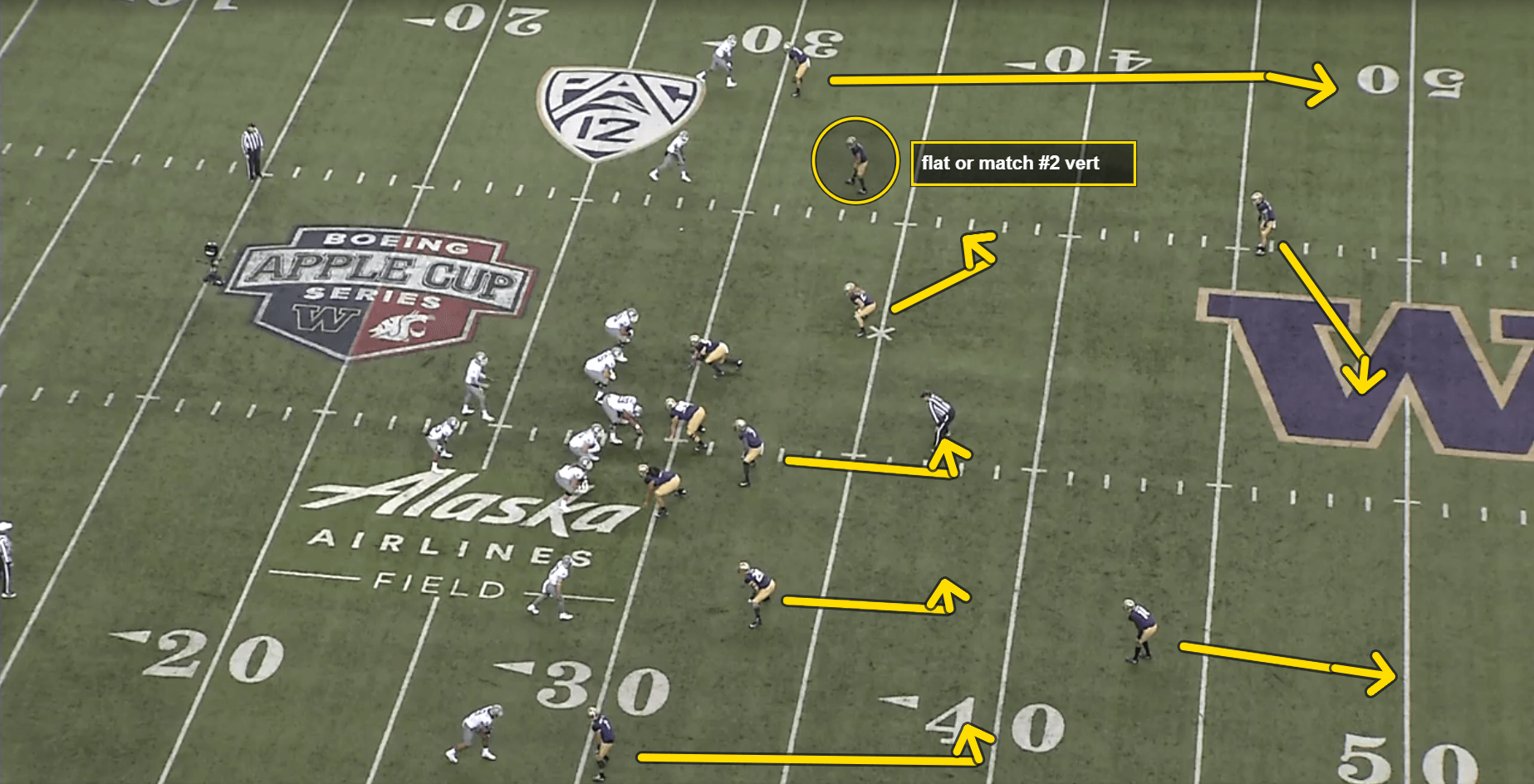 If the defense can force the quarterback to have to wait for receivers to get open because it has filled the passing lanes with 3 more defenders then they have eligible receivers and it can get pressure on the quarterback at the same time, good things will happen.

One of the two Gardner Minshew interceptions in the 2018 Apple Cup displayed this strategy in action:

Against zone coverage, the two shallow crosses will settle and become stationary targets underneath. This helps the Husky defenders because even if the receiver catches the ball, it will take time for him to regain his speed. We can see even with a three-man rush; the Washington defensive line gets through to the quarterback and forces an overthrow.

Another forced scramble by the Washington defense’s three-man rush in the 2018 game:

Only a week prior to the 2018 Apple Cup, Minshew threw for 7 touchdowns against the Arizona Wildcats. ‘Zona also rushed 3 guys a lot but a) couldn’t get pressure and b) dropped too shallow (often because they were dropping defensive linemen).

The result was a lot of this:

The Tite front is Washington’s base defense and they didn’t feel like they needed to change it up and put more edge rushers on the field against a pass heavy offense. This meant that they could still control the game when WSU did run the ball. The Tite front defense will force the ball to bounce to free players like on this play: 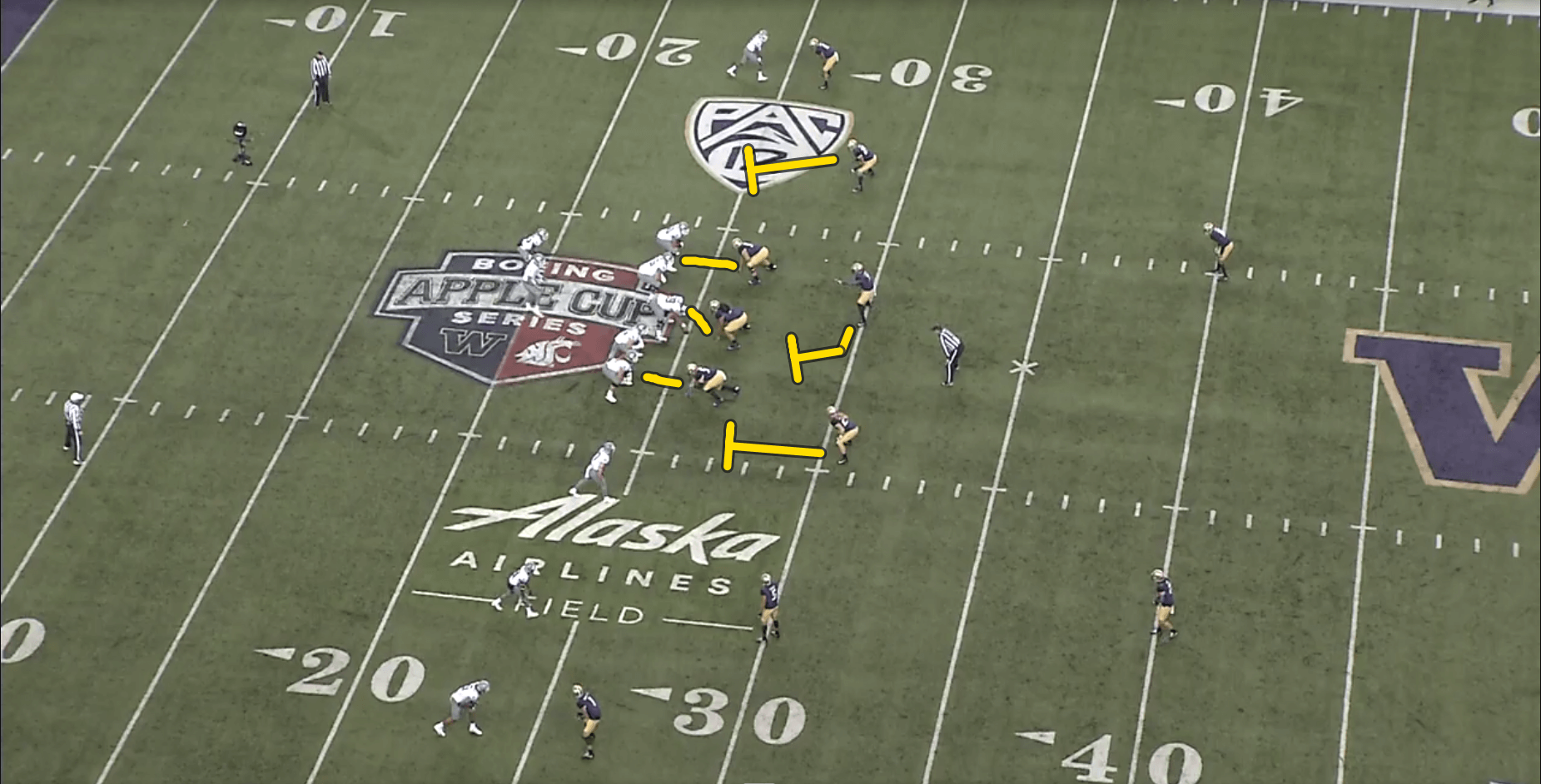 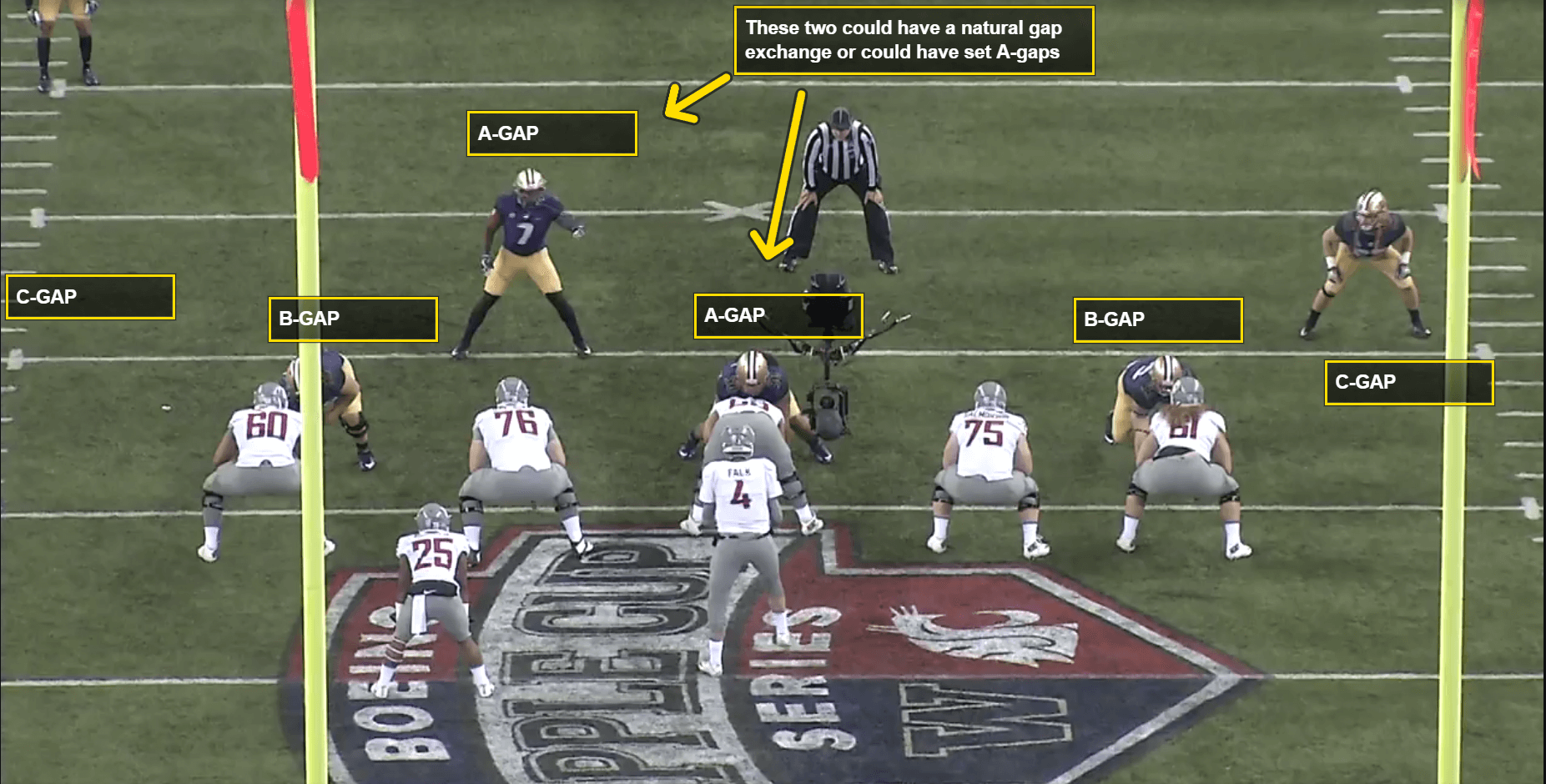 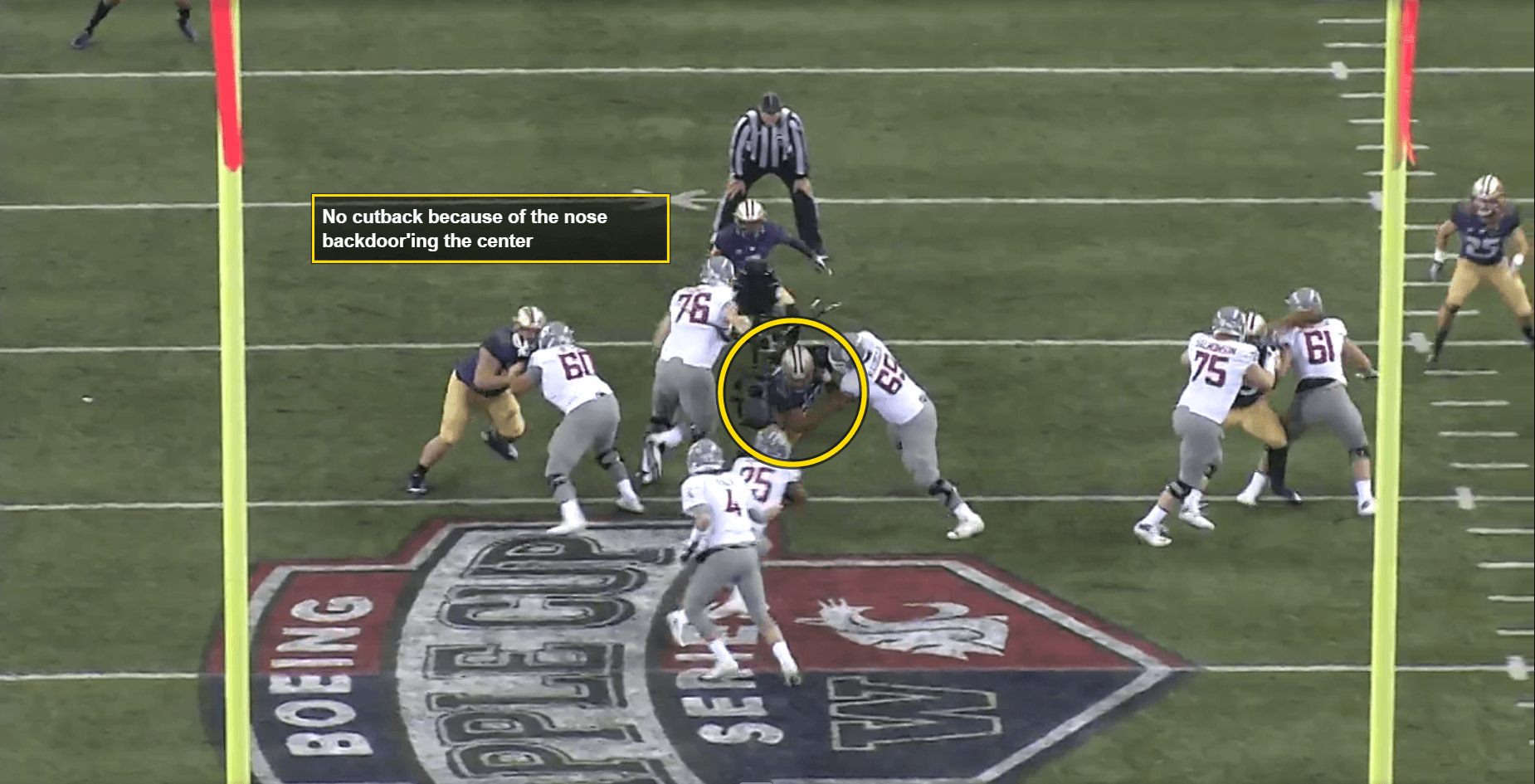 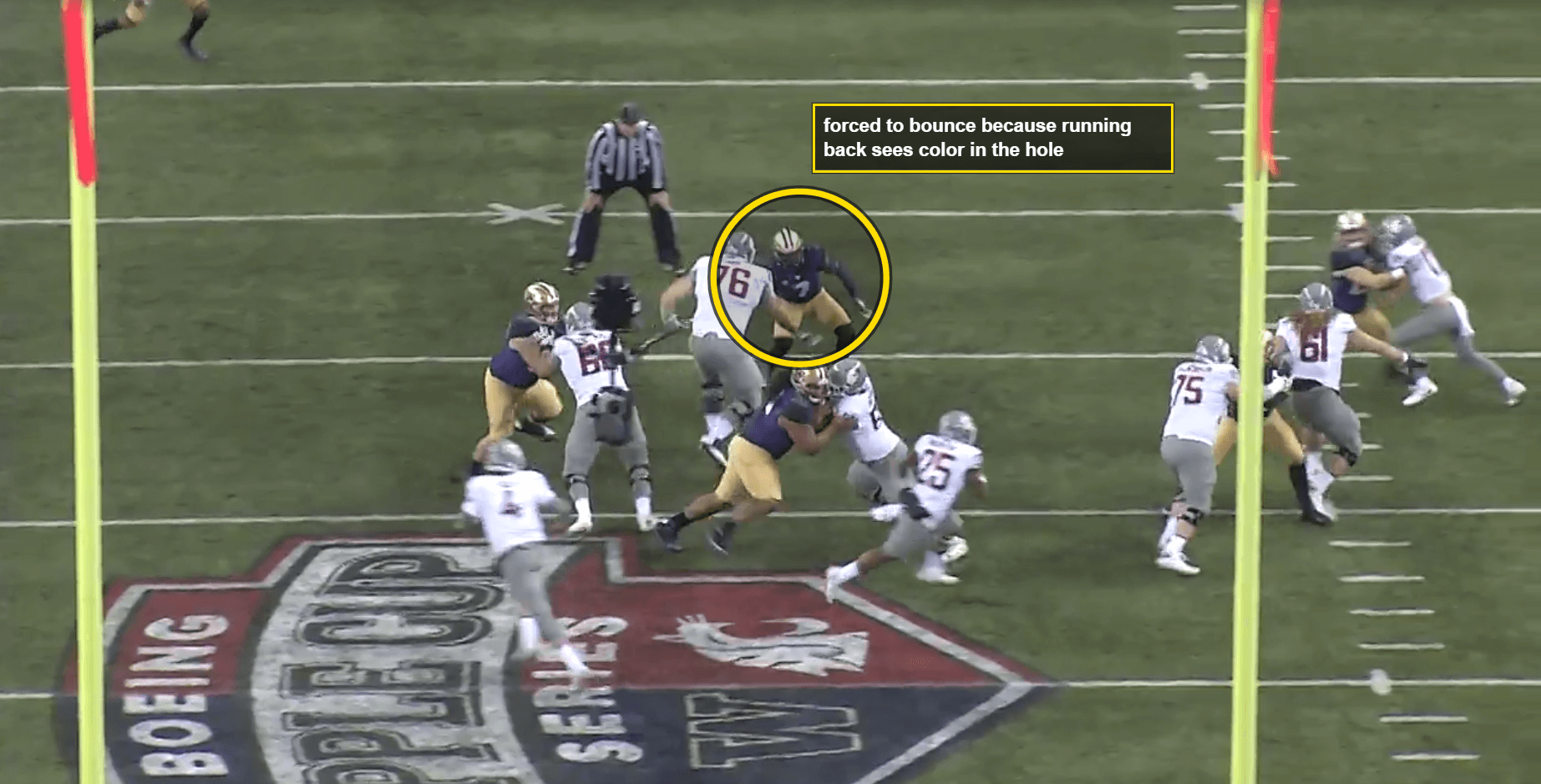 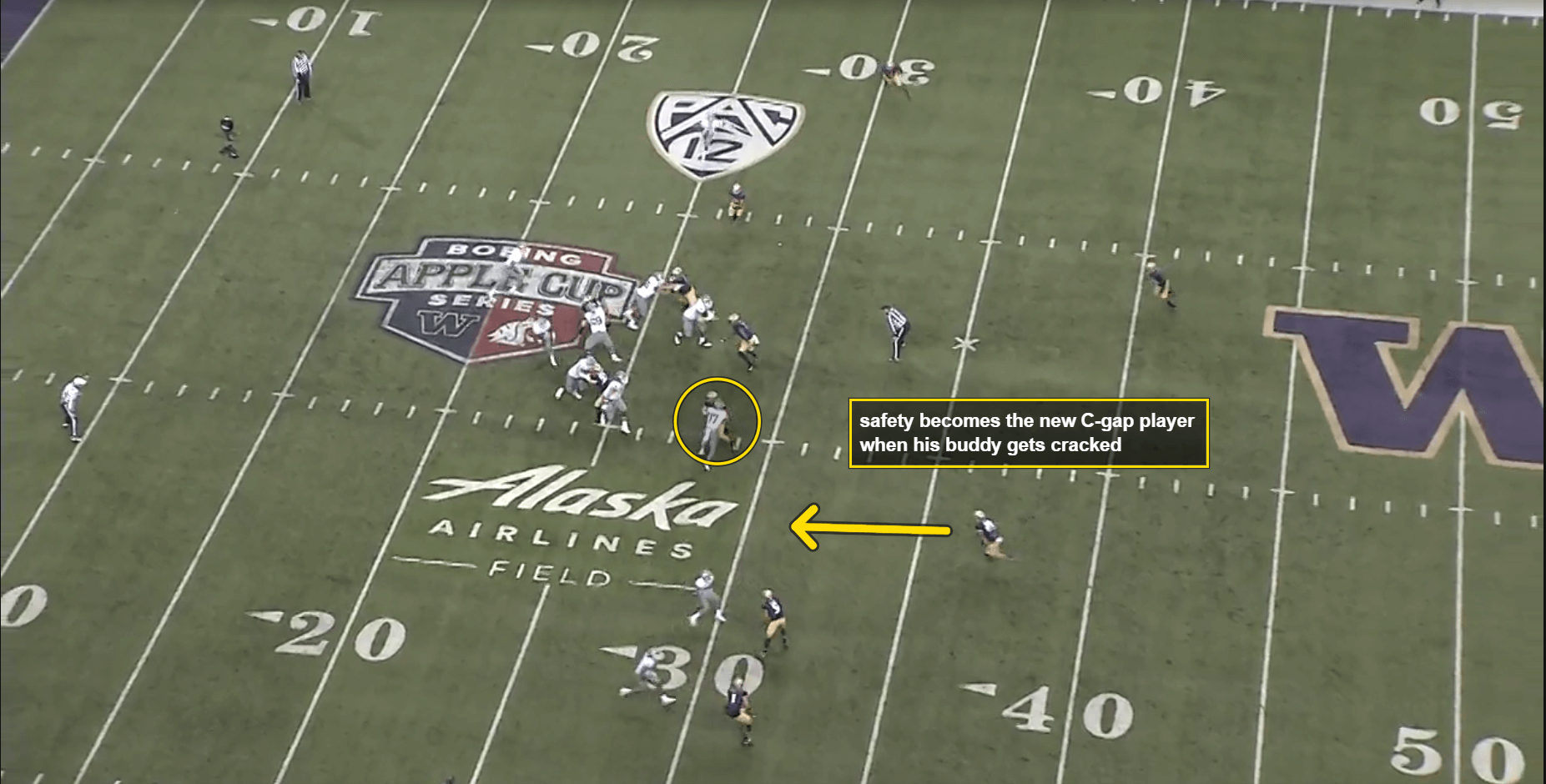 Asked about Mike Leach and his offense after another a Washington win over Washington State in 2018, UW defensive coordinator, Jimmy Lake, had this to say:

.@UW_Football co-DC Jimmy Lake after shutting down Mike Leach and the Air Raid for a fifth straight season: pic.twitter.com/qoOODW1Ejs

Having better talent and having that talent execute the scheme is the number one factor in UW’s win streak against the Cougars. Many teams have tried to stop the Air Raid, but few teams have succeeded. Chris Petersen and his Washington Huskies are one of those few teams.