The Jump Hook Technique - What is it and how do NFL offensive linemen use it? 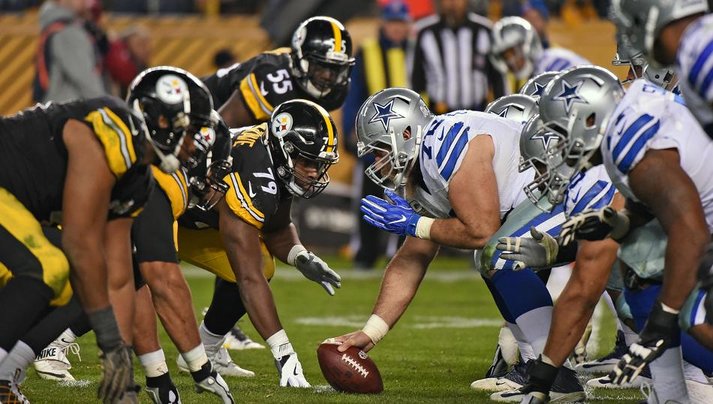 Offensive linemen can benefit from having multiple ways to accomplish the same objective. There are several examples of this ranging from the slingshot, gallop and snatch/trap techniques. The goal in each scenario is to block the man lined up across from you, but attempting it in the same way over time can work against the player. The NFL is a matchup league, full of players and coaches who meticulously comb through film to identify trends that they can exploit. When players have a “toolbox” of diversified techniques to pull from in order to do their job, they become much harder to prepare for, and thus harder to beat.

An example of this for offensive linemen comes in the running game with the jump hook technique, which is basically another way to reach, hook or pin a defender inside when the runner has an outside track. Think of outside zone when the blocker has an outside shaded defender in front of them. Rather than execute the traditional footwork, aiming points and hand usage constantly, the jump hook technique acts as a supplement strategy to accomplish the same goal.

Some keys to help ensure successful execution of this technique begins before the game and in the pre-snap phase. First, knowing the opponent and gauging what the defender has shown on film in terms of playing style is a huge plus. At the snap, do they read or react more than shoot up the field? (Defensive scheme, tendencies, any false steps?) Are they primarily on the field to defend the run or rush the passer? (Body type and level of quickness). Where is the runner’s track taking him? (Want an outside track). Once the blocker can answer these questions, they can begin to think about using the jump hook as a changeup to win a rep.

Ideally, this should be done on a tight shade, which makes it much easier for the blocker to get their hands on the defender quickly. The jump hook is predicated on quick hands and efficient footwork. Before we get into more detail, let’s take a look at one of the top practitioners of the jump hook technique currently in the NFL, New York Jets right guard Brian Winters.

Notice in the clip how Winters has a 3-technique alignment over his outside shoulder and begins the rep with traditional footwork for a reach block on outside zone, beginning with the bucket step to get his hips opened up to start working around the defender. This sells traditional outside zone footwork, but it serves as a misdirection because Winters chops down on the defenders’ forearm/wrist area rather than press the outside shoulder, catching him off guard and sending him to the ground.

This is one of many variations of the jump hook technique, showcasing an element of surprise and keen sense of how to win leverage on an opponent.

This jump reach by Winters if FILTHY. Maybe my favorite week 1 highlight from any OL: pic.twitter.com/TnXijEgCan

Notice how Winters finishes the block by pinning the defender inside, ensuring he’s unable to undercut him to make a play from the backside. This is a key component of a successful jump hook because one of the risks of the technique is being over-aggressive and opening up backside pursuit for the defender.

This next clip comes from New Orleans Saints Pro Bowl center Max Unger, who has a tight shaded nose tackle over his right shoulder. The Saints are running a pin-pull concept and Unger is tasked with reaching his man.

First, Unger is exceptionally quick out of his stance highlighting the “jump” portion of the technique, with precise, accurate hand placement to “hook” the defender’s outside shoulder. Unger pulls down on that shoulder/arm to gain leverage as he wraps his hips around to seal before the defender realizes what happened. This is a textbook display of the how and when to utilize a jump hook:

After breaking down a guard and center using the jump hook, let’s travel further outside for a prime example of what it looks like from an offensive tackle perspective. Los Angeles Rams left tackle Andrew Whitworth provides us a great illustration of what it looks like when a player capitalizes on experience to broaden the depth of their resources as a tactician on the football field. At 37-years old, the All-Pro is still outsmarting defenders with a keen sense of timing on when to employ unique techniques such as the jump hook.

Earlier it was mentioned that a tight shaded defender is the opportune alignment for blockers to employ the jump hook, which occurs here only in a unique way. Since Whitworth is at left tackle, a tight shade can actually be someone lined up in a “loose” 3-technique over the left guard since they are more closely aligned to the tackle, despite their eyes reading the guard.

Needing to scoop the defender (cut off his path from the inside), Whitworth picks up on this and shows excellent snap anticipation to explode out of his stance, jump and uses both hands to “hook” the defender, effectively snatching him to the ground while his head is too far over his feet. This takes advantage of the unbalanced positioning of the defender that results in an easy win. The climb to the second level to pick off the linebacker is just icing on the cake:

This jump hook and climb by Whitworth to help spring Gurley is just filthy: pic.twitter.com/iIsKjPOWx4

This last clip is from the front angle in order to take a closer look at the exact hand placement of a successful jump hook. Coming from Green Bay Packers center Corey Linsley, it starts with incredible quickness out of his stance, followed by precise hand placement to capture the outside tricep area of the defender while using his inside hand to simultaneously influence him to the ground.

RELATED CONTENT: Check out these techniques for neutralizing a double team

The jump hook technique is a way for linemen to incorporate a savvy option into their approach when having to reach or scoop a defender in the running game. Combined with knowing the opponent beforehand, keying the alignment of the defender pre-snap and operating within the scheme, linemen can begin to work this technique into their arsenal with success. As previously mentioned, this should be used with caution and primarily as an alternate means of getting the job done in select times throughout a game or season.