How the New Orleans Saints offense attacks first down 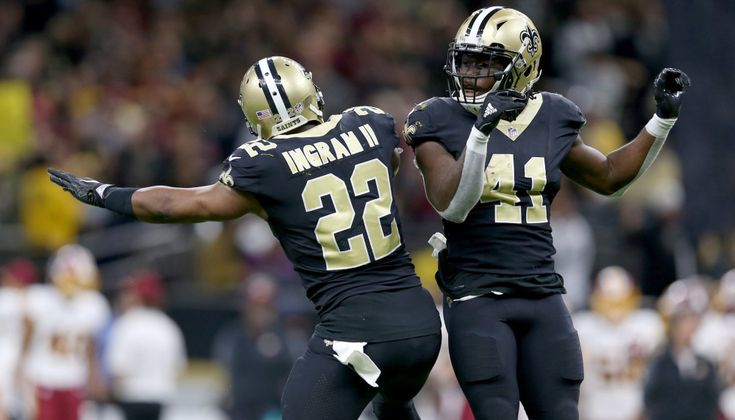 There'll always be the hot new coordinator. We’ve spent this entire offseason dissecting the fantastic schemes of Sean McVay and Doug Pederson. Among other things last season, McVay taught us how to simplify communication from the sideline to the quarterback, and Pederson showed how to scour through data to find the right calls.

Somewhere, somehow, even with all the success he’s had in his previous 12 seasons in New Orleans, we’ve forgotten about little old Sean Payton and his wildly efficient offenses. Sure, I get it, if you don’t win enough games, if you don’t make the playoffs, they forget about you, no matter how great your system is. Of course, that’s more of a testament to how bad the Saints defense has often been rather than the anything to do with the offense.

The Saints have spent all but two of Payton's years in the top 10 in offensive defense-adjusted value over average (DVOA), according to Football Outsiders. The lowest they’ve ever been is 12th. They’ve trotted out top-nine offenses the past seven years. Meanwhile, in eight of Payton's 12 years, the defense has ranked 22nd or lower. Five times they’ve been 30th or worse. That’s not just bad, it’s horrible.

In 2017, the Saints finally paired a great offense (second in offensive DVOA) with an above-average defense (eighth in defensive DVOA). They were one play away from the NFC Championship Game.

One of the ways Payton and the Saints stay ahead of the crowd is their ability to get the ball to their running backs through the air on early downs. In Warren Sharp's excellent 2018 Football Preview, he says, “On first down-and-10, running back targets produce a 58 percent success rate, which was 2 percent more successful than wide receiver targets over the past two years. Yet they're targeted just 19 percent of the time as opposed to 59 percent for wide receivers ... When offenses like the Patriots and Saints are among the league leaders in running back pass rate on first-and-10, other teams should realize the value to be found there”

Recently I wrote about how Payton uses Mark Ingram's versatility in the screen game. Today we’ll discuss how he gets the ball to newfound playmaker Alvin Kamara, who caught 28 balls out of 36 targets on first down in 2017.

We start with the Saints' weakside option route that Bobby Peters beautifully wrote about here. I also cut up all the times quarterback Drew Brees hit Kamara on this concept throughout the whole season here.

To recap, there's a deep route - either a go route, a corner route or a deep out route - designed to hold the cornerback high. The running back will come out, get on the toes of his defender and make a move depending on the leverage of the defender. Generally, this ends up being a quick out route by the running back.

If teams try to trap the out route by keeping the corner low, Brees is supremely accurate and can hit the fade route in the "hole."

tfw when you know the weakside option route is coming so you play cover 2 to squeeze the route between the corner and the backer but the QB is Drew Brees so you still lose pic.twitter.com/yvuuNCcTIQ

The Saints took their deep shots to Kamara off sort of an option route progression, the wheel. It certainly helps to have someone as good as Brees throwing accurate back shoulder passes.

In this incredibly important throw against Minnesota in the playoffs, Brees knew the Vikings were in man coverage pre-snap. When he motioned out Kamara and linebacker Eric Kendricks shuffled out to greet the running back rather than LB Anthony Barr already on that side, it confirmed the man coverage for Brees. The two outside receivers have short to intermediate breaking routes to clear the space down the sideline for Kamara.

In the clip below, the brilliance of Brees showed up again on this weakside wheel route concept. The receiver to the bottom of the screen (Michael Thomas) was supposed to set a pick on the first inside defender he sees, in this case New England linebacker Kyle Van Noy. Ideally, the picked linebacker won’t realize what’s happening and runs underneath the pick, while the wheel route runs past him. However, Van Noy recognized the concept and stayed over the top of the wheel. Brees adjusted his throw to slow Kamara down before Van Noy could get to him.

I didn’t find the screens called for Kamara very pretty, but sometimes you just give an electrifying player an easy slip screen and let him do his thing.

What makes the Brees-to-Kamara connection so efficient is Brees often finds Kamara as a check-down. We saw Payton scheme intricate ways to get Kamara the ball, but even when he’s not the primary receiver, Brees’ ability to go through his reads and find Kamara late in his progression is huge. There’s no forcing the ball to covered receivers.

Here, against the Los Angeles Rams, the Saints run a four verts concept with Kamara as part of the protection before leaking out. 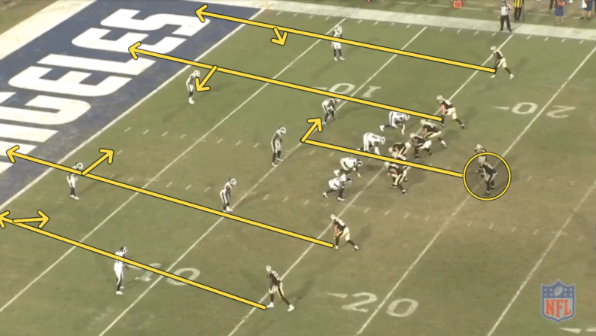 The Rams do a good job of protecting against four verts within their Cover 4 shell. Younger quarterbacks try to fit the ball into a tight window on this play. The wily veteran Brees moves through his progressions before finding Kamara late for the touchdown.

The same thing happens here against Washington. The Saints again run a four verts concept, but with switch releases by both sets of receivers. 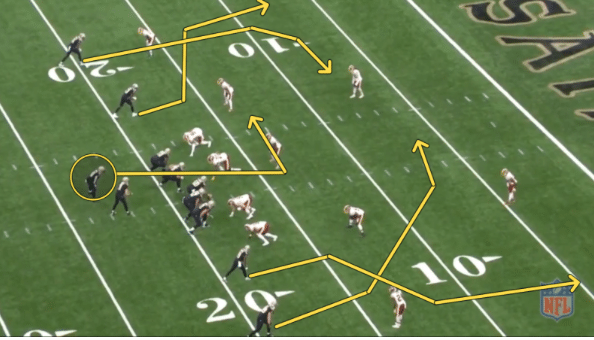 We can see Brees drop back while reading the downfield release of the receivers before coming down to Kamara late for a TD.

The combination of Payton, Brees and Kamara showed you can find interesting ways to get the ball into your running back's hands via the pass on early downs. There were a lot of designed plays to Kamara that gave the Saints the matchups they craved. They also used Kamara to alleviate pressure on Brees, as he was almost always open on underneath on check-down routes.

Finding ways to get your running back the ball on early downs will keep a defense honest. Take some of these ideas from the Saints and pass your way to a title this season.