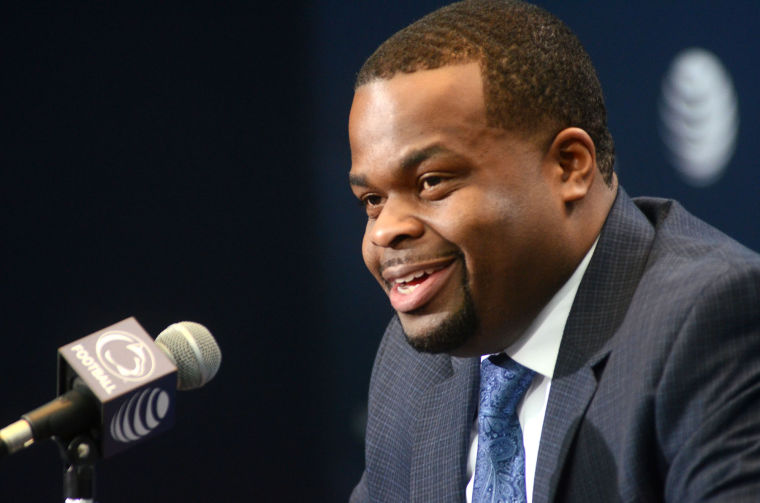 I got to sit down with Coach Charles Huff, who is the run game coordinator and running backs coach on Coach Joe Moorhead’s staff at Mississippi State. This interview is broken up into two parts. In part 1, we talk about his coaching journey, and how he evaluates running backs and puts them in position to win.

TN: Coach Huff just moved from Penn State to Mississippi State and he’s now the run game coordinator/running backs coach. Could you tell us more about your coaching journey?

CH: “I’ve been blessed and I’ve had the opportunity to move around a bunch in this coaching profession. I started coaching at Tennessee State in Nashville, Tennessee, (an NCAA Division I-AA) program. I started there right out of college and was able to get my feet wet. From there I was able to move to the University of Maryland. I was assistant line coach and quality control there. That’s kind of where the journey took full speed for me. I met a lot of great people there.

“From there, I was able to go back to my alma mater, Hampton University, in Virginia. From there, Coach (James) Franklin ended up getting the job at Vanderbilt and brought me down back to Nashville.

“Had a great run with Vanderbilt was there the first year and kinda got the program turned around, got it going in the right direction. Was able to meet and get to know Chan Gailey, who at that time was the head coach of the Buffalo Bills. He offered me a job with the Bills. So I got the opportunity to work in the NFL. A lot of people say the NFL is a great league, but it is a business. The relationship part you get in college.

“The NFL is more of a business aspect. From there, had the opportunity to go to Western Michigan. Then when Coach Franklin got the job, I ended up going back to Penn State. I’ve been there the past four years. It’s been a good journey. Got an opportunity to grow. Opportunity to learn.

“We did some really good things and had a lot of success there (Penn State). Wanted to get an opportunity to be challenged again. Mississippi State came along and Coach Moorhead offered me the opportunity to be assistant head coach and run game coordinator. Here I am in Starkville with Coach Moorhead and the rest of the guys here and looking to do some great things.”

RELATED CONTENT: How the midline option could be an advantageous play for your offense

TN: Awesome. So you’re pretty used to moving by now, I assume?

CH: “(Laughter) Yeah. Me, Mayflower, and United — Got them on speed dial. They know me and I know them. I’ve been blessed to do it at a young age before I have a family and you now have to make a decision on kids and school. So I’ve been able to make some of those decisions. I would say if it wasn’t for that fact. If it wasn’t just me, I don’t think I would be able to make all those moves and sacrifices, but it’s paid off and worked out for sure.”

TN: Definitely. And you’re in a good place now. So how does your role with Mississippi State change from Penn State?

“Becoming assistant head coach now I’m a lot closer to the administrative duties and I see things from the other side. Although I’m not sitting in the chair, there are some things that I’ve been previewed to that I may not have been previewed to as just a special teams coordinator.

“So, to me it’s all about growth and decisions that you make in a coaching profession that makes sense to you. And it has to make you feel like you’re learning and growing and getting closer to where you want to be. As long as you’re doing that, to me you’re moving in the right direction. You wanna always continue to grow. Whether that’s learning more, clinicing, or communicating with your guys.”

CH: “That’s a great point. It’s easy to say, “Well, I move to this job or I move to this job,” but all jobs are dictated by relationships. We had a great thing going with Coach Franklin and the guys at Penn State. So for me to move, it had to be for the right person and the right situation, and that’s Joe.

“The one thing I learned from working with Joe over the two years is that he’s the same person every day. He’s down-to-earth. It’s not about him. He’s not into doing things to make himself look good. He’s all about the team. He cares about the best player on the team as he does a walk-on who may not get as much notoriety or recognition.

“When you can work for good people and put yourself around good people, those are the situations you wanna be in. You can’t put a price tag or a number on working with really good people that you trust. For me to move on to Mississippi State, I don’t know if I would have done that with someone I did not know well and trust. Obviously, on the field, Joe’s numbers speak for themselves. Everywhere he’s been, they’ve won a conference championship.

“Everywhere he’s been, they’ve been very productive offensively. Those things speak for itself. The people here in Starkville will get to see and have already seen it. Joe is a guy from Pittsburgh who is down-to-earth, good ol’ football coach. He loves ball, loves helping people, loves winning, and it shows in his track record and the places he’s been.”

TN: How do you evaluate running backs when you scout them and what kind of traits you look for?

CH: “There are multiple levels and multiple running backs. What is your system and what does your system require? If you are a system where you’re going to have a fullback in front of the running back and you need a guy to run downhill, you need more of a power guy, a bigger guy. Then I think that’s what you need to look for. If your system spreads things out and puts the ball in space and put the defenders in a 1-on-1, then you’re looking for that type of back.

“For us, in our system, we are looking for a back who obviously has unbelievable speed. I think that’s the one thing you see in the combine, in testing, and even the high school. Speed is something you can’t really teach. You can refine it, I don’t think you can teach it. You can refine the techniques, but we look for a guy with speed. Speed is the one thing we think changes the game immediately.

“Obviously, a lot of people say it’s vision, it’s balance. All of those are important, but those things to me are teachable. If you can train the eyes, then you can train the muscle groups. But the two things that are very hard to improve greatly are speed and hip flexibility. So those are the two things we look for in our guys. A guy who has a little wiggle and a guy who can flat out run.”

CH: “A great example would be us coming here as a new staff. Obviously, we did not recruit any of these young men who are already here, although they have unbelievable talents. So we have to find ways to put these guys in position to be successful. I think you do that by moving guys around to get them in position to use their strengths.

“That’s the biggest thing. You gotta get around those guys. You gotta find what they do well and let’s put them in position to do what they do well. Let’s try and minimize what they struggle with. The things they struggle with may mean subbing a guy out, it might mean playing a guy only at a certain position, or moving a guy around so teams aren’t able to put them in a certain position. If it’s a running back, put him at wideout or if it’s a strong guy, playing him on short-yardage situations … whatever it may be.”

TN: Without giving too much away, can you gives us a specific example?

CH: “In today’s game, there are bigger running backs and some running backs, for example, we had Saquon Barkley at Penn State and he was the total package. So for us, to move him around at different positions, whether that’s wideout, running back, quarterback, motioning him. Putting him in position to get the ball and not allowing the defense to bottle him in to one position.

“If they do something really well like play in space, but they aren’t very strong or their vision isn’t there yet, use them in concepts like speed sweep passes. Let them to play on the edge where they can truly run.

“If they are a good zone guy, but they don’t have the burst, put them in the backfield, the understanding being they will always play above the sticks. They’ll get you three, four, five yards. They may not go 80, but they’re going to get you five, six or seven.

“Put them in position where they can have success and be willing to move guys around. I think coaches box players in and say, “well, he’s a running back, he’s a wideout.” They won’t move them around to other positions or find ways to get them the ball.”

Make sure to look for Part 2 on USA Football later this week.