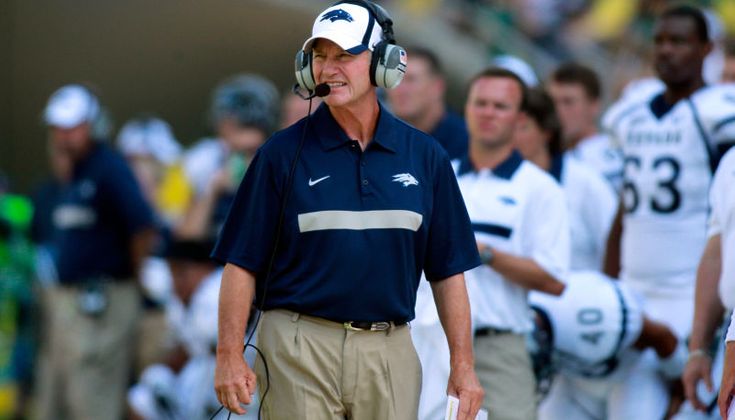 Nevada under former head coach Chris Ault featured a dominant running game out of the pistol offense. Photo via Deadspin.com

In the 2008 season with head coach Chris Ault at the helm, Nevada began to feature the zone-read in their pistol offense, and after that, the Wolfpack consistently had one of the best running games in the nation.

From 2008-12, though Ault’s final season before retirement, Nevada ranked fourth, first, third, eighth and seventh in the country on the ground. In 2009, they averaged 7.4 yards per carry, the best of any Football Bowl Subdivision team over the past 15 seasons.

Nevada had many different ways to run the pistol zone-read, but the blocking scheme and quarterback read were almost always the same.

The footwork and mechanics of the mesh-point are a little different when running the inside zone-read from the pistol instead of the offset shotgun. When Nevada ran the zone read, their QB’s used a “snatch” technique.

The running back runs straight downhill at the center on this play. Because of this, the QB must first clear the midline. He'll essentially jump to the side and place himself at a cocked angle facing the read-key (the end-man on the line of scrimmage, or EMOLS). The QB then sticks the ball out with bent arms and reads the EMLOS. The QB doesn't ride the running back at all, different from the more common ride-and-decide technique. The QB can get a good read on the end before the running back gets to the mesh. As the back gets there, he'll either loosen his thumbs and give the ball, or squeeze his thumbs on the ball and keep it.

There are a few advantages to running this play from the pistol and using this footwork. One is the running back works directly downhill on the inside zone play. This enhances his vision, but also allows the ball to hit quicker inside. Most defenses try to have their defensive end “slow-play” the zone read, and then close on the cutback lane. When running this concept from the pistol, the ball can hit the cutback lane quicker, which makes it more difficult for the end to slow-play the mesh. This also allows the QB to turn the corner and get into the alley quicker when pulling the ball, because he doesn't ride the back at all on the mesh. The pistol formation also helps the offense hide tendencies, as they could run the zone-read in either direction without having to shift or motion.

Many of the variations Nevada ran included changes of how they blocked the QB keeper. The base variation involved a “bluff” block from a tight end or receiver in a wing alignment. Here's a diagram: 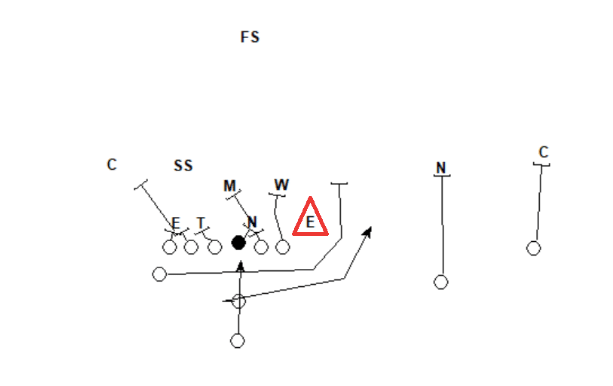 The wing loops around the read-key, and then turns up to block the first defender who shows outside the read-key. Versus two-high alignments from the defense, it's typically an outside linebacker in an apexed position. Against single-high alignments, this player often can't tell who the defender will be pre-snap, and has to block the first defender who shows. Here is a video of this scheme:

This play's a good example of the backside end attempting to slow-play the zone read. Because the back works immediately downhill, he hits the cutback lane inside the end before this defender can close the space. The strong safety follows the receiver across the formation, so the receiver blocked that defender on his bluff block.

Nevada would also run this play off jet motion, with the receiver in motion executing the bluff block. Here's a diagram: 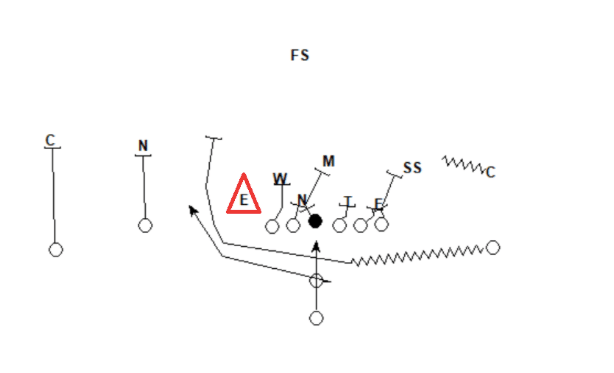 This time, the free safety is the first defender to show in the alley, so the receiver blocks him, allowing the offense to account for every defender on the keep-side.

Another common variation of this play that Nevada ran involved using a backside “arc” block from either a tight-end or wing. The scheme is essentially the same, as the tight end/wing still blocks the same defender as they would on a bluff block, but gives a different look to the defense. Here's a diagram: 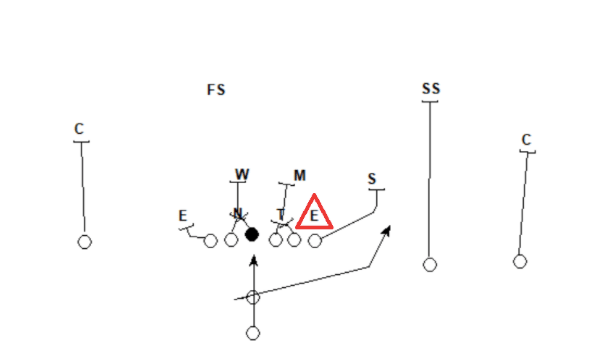 As I said earlier, versus two-high alignments, the arc/bluff block will generally be on the apexed outside linebacker. Because of this, any slot receiver on the backside will block the safety and leave an apexed defender alone.

Here's an example of a give-read on this play:

Nevada’s use of the option negated their need to control perimeter defenders with RPOs. Even though the SAM linebacker is close to the box, he'll generally not be a threat to the inside zone play, because he has to deal with the perimeter threat of the quarterback.

Here's an example of the QB getting a keep-read on this play:

In my article on Oregon’s use of the triple option, I described the “sift” technique used by the backside tackle on these inside zone plays that helps combat the scrape-exchange. Nevada would also use this technique on the backside. Here's a diagram: 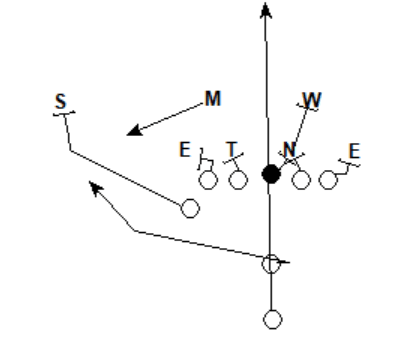 The MIKE linebacker follows the wing on his arc block, leaving the defense outnumbered on the inside for the inside zone play.

Nevada could also combine these two plays into a single zone-read play. Here's a diagram: 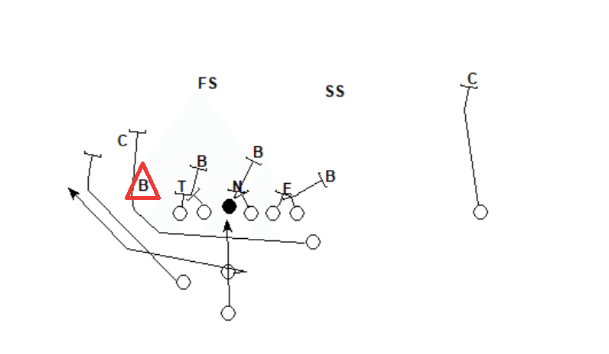 Nevada frequently used this play from their “train” formation. The offset back arcs for the first defender outside the read-key. The wing comes around on his bluff block and blocks the first defender inside the arc block. The unusual formation and added moving parts make this scheme even more difficult to the defend. When facing any type of option play, the defense must be sound in their option responsibilities to have success. This becomes increasingly difficult when facing three-back option plays, as the offense brings three players from the box to the perimeter in the event of a keep. This adds misdirection to the play and increases the odds of the defense blowing one of their responsibilities. Here's an example:

The defense is in decent position to play the keep, as they matched the QB and his two blockers with the backside corner and both safeties. But the read-key also played the QB, leaving the defense with no secondary run support on the inside zone play. This allowed the running back to score untouched from 30 yards out.

Nevada could also run the pistol zone-read with two arc blocks on the backside. Here's a diagram: 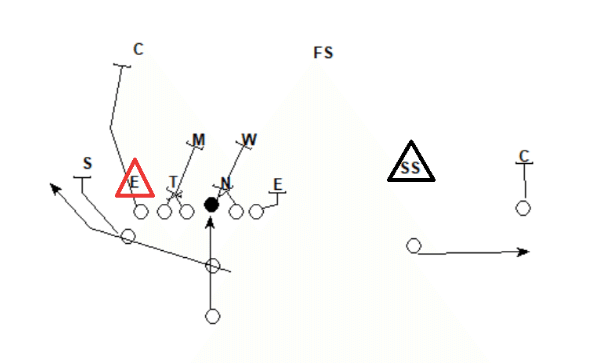 And here's video of the play:

Any great offense must have answers to defeat commonly used defensive tactics designed to stop their base plays. One way defenses attempted to play the zone-read was to play Cover 1, force the QB to keep the ball and have the free safety come down to play the quarterback. Nevada’s answer in response was to use crack blocks on the keep-side. Here's a diagram: 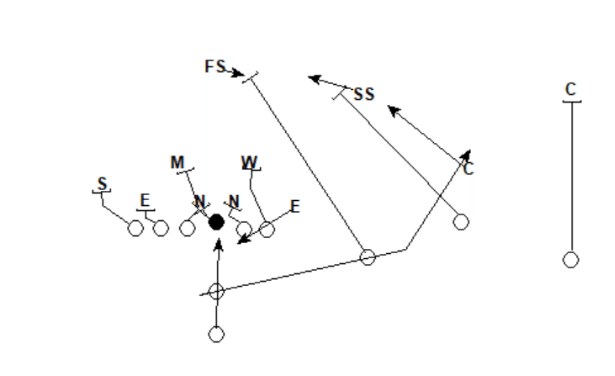 The No. 3 receiver on this play cracks the free safety. The offense also brings the No. 2 receiver down to crack the strong safety aligned over No. 3. The corner aligned over No. 2 should follow him in man coverage, allowing the offense to block three defenders with two blockers, which lets the QB have good space on the perimeter. Here's video of this play:

Nevada also enhanced this scheme by mixing in unbalanced formations, which were unique looks for the defense to defend, and gave the offense advantageous numbers and angles for their zone read play. Here's one example of the pistol zone-read from an unbalanced formation: 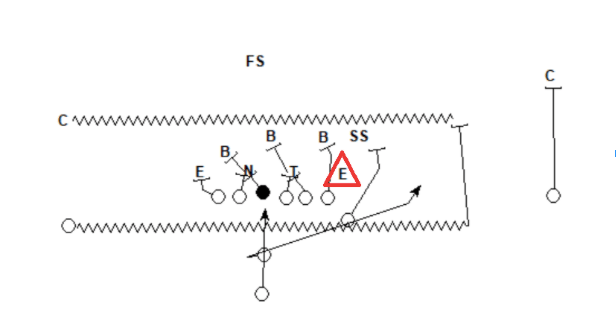 When using these unbalanced formations, Nevada frequently ran the ball to the “nub” side, meaning the open-side of the formation where the tackle is the end-man on the line of scrimmage. When aligned in a 4x0 formation such as this, there's a chance the defense will have no secondary run support to the nub side since there's no pass threat. This leads to many big runs if the back clears the first two levels, as there's no one left. Here's the video of Nevada running this play:

The tight end on the backside still executes an arc block here, but since the defensive end is aligned outside of him, he releases inside to block his defender. The corner runs with the receiver in motion, leaving the defense with the free safety as the only potential secondary run-support defender. The free safety runs down to play the QB, and the backside end can't force the keep. This leaves no one left for the defense on the frontside once the running back bounces the run. The defensive end attempted to force the QB to pull the ball, but again, the inside zone can hit quicker out of the pistol, allowing the running back to run away from the defender.

Even if the defense has a secondary run-support defender on the frontside, the offense is still in a good position. Here's an example:

The defense has the corner unblocked on the frontside of the inside zone play, but corners are usually the worst tacklers on the field, and the running back still gains eight yards before being touched by this unblocked defender.

There's also a good chance this defender will fill incorrectly, which lends itself to big runs. Here's an example:

Nevada had one variation of this play that slightly changed the blocking scheme and read for the quarterback. They could “lock” the backside of the line to the down lineman, and read the backside linebacker. They used this scheme occasionally to take advantage of an aggressive backside linebacker. When running this play, you want the backside linebacker to step up to fill the run quickly, which allows the QB to keep the ball and run around him. It's not a very good play if he stays back and forces the give, since he's still in a good position to fill the cutback lane on the inside zone play. Here's a diagram of Nevada using this scheme with a bluff block from the wing: 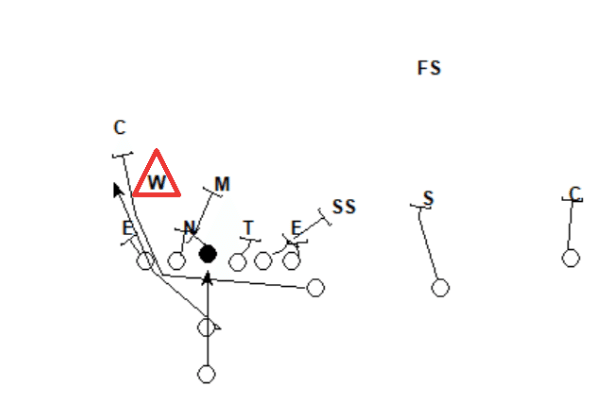 The wing now comes around on his bluff block and inserts inside the tackle’s block, leading up to the corner. Here's an example of Nevada running this play with two backside arc blocks (also from an unbalanced formation):

As you can see, the backside linebacker fills aggressively, allowing the quarterback to keep the ball around the edge.

After Colin Kaepernick was drafted, NFL teams began to study Nevada and borrow some of their pistol zone-read concepts. In the 2012 season, the San Francisco 49ers and Washington Redskins began to use these concepts with Kaepernick and Robert Griffin III. That season, the Redskins ranked first in rushing yards per game, while the 49ers ranked third. Below are a few cut-ups of the 49ers and Redskins using these concepts. (Note: the Redskins didn't use the snatch technique, and instead used the ride-and-decide method. The 49ers allowed their fullbacks to insert inside the read-key if he remained wide on their arc and bluff blocks).