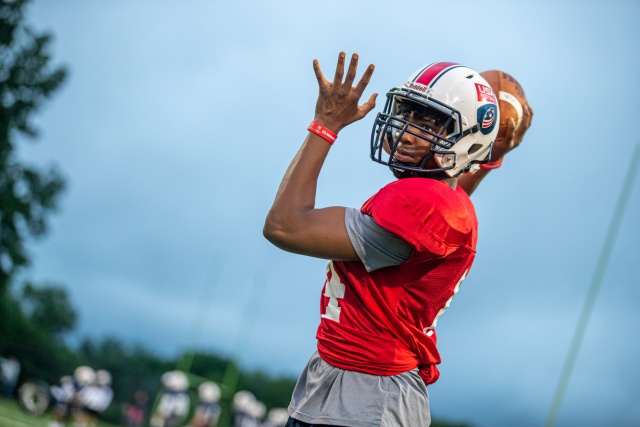 Every offense is looking for an all-purpose package to incorporate into the offense. Any play series that provides multiple resources for your offense is a package worth looking in to. Sprint-out passing is an extremely valuable component to offensive production. This article will detail the value of carrying a sprint-out series, base sprint-out concepts, variations and complimentary plays.

How the ‘Red Zone’ Became the Miami ‘Redhawks Zone’

After a 2018 season of witnessing near-perfection whenever the Miami Redhawks offense entered the ‘red zone,’ co-offensive coordinator Eric Koehler is very matter-of-fact as to the biggest reason for such success. “It starts with good players,” said Koehler. “We like to think we do a good job of game planning for that part of the field, but it’s a fact we have some guys who can win the ‘one-on-one’ matchups! That’s a huge part of it.”

Before the 2017 college football season, the term “Smash Fade” wasn’t talked about much in the media. As a matter of fact, a large majority of coaches didn’t seem to use the concept or have it in their repertoire of plays. Almost every team in America uses a form of the smash concept and a fade, but no one really combined the two until recently. Now, it seems like the entire NFL, NCAA and majority of high school teams use the play.

Learning from the Buckeyes: Defeating man coverage with mesh

Ohio State versus Michigan this season was hyped up to be one of the games of the year in the Big Ten Conference. Ohio State, featuring a future NFL quarterback in an offense that can score on anyone, faced off against a Don Brown-led Michigan defense, who has put the clamps on their previous opponents all season. What resulted was a Buckeyes’ 62-point offensive explosion that left many wondering what happened to this vaunted Michigan defense.

During the Tom Brady-Bill Belichick era, the New England Patriots have sustained unparallelled success, winning five Super Bowls together. Although there are many other things that have contributed to their success, the Patriots have always excelled with their scheme. When studying their 2014 season, one play that became a staple of their offense and was especially productive was their Y-Hook/Tosser concept out of empty.

How the Philadelphia Eagles offense takes advantage of man coverage

Tight man coverage creates a few different issues for offenses. The defense has the ability to disrupt the timing of traditional passing concepts with re-routes at the line of scrimmage. Due to the more aggressive nature of man coverage, the throwing windows are often tighter as well.

New Orleans Saints coach Sean Payton has utilized a sprint out smash concept for years. The play holds a spot in many Saints fans’ hearts, as it was called on the two-point conversion in their 2010 Super Bowl victory against the Indianapolis Colts

Bunch and stack formations are a staple of Los Angeles Rams coach Sean McVay’s offense. These formations allow him to get free releases for his receivers and create the leverage they need to run their routes. This article will focus on one particular formation, The trips-2-man-stack. Let’s take a look at three concepts he will call out of this formation.

How the Kansas City Chiefs utilize their trips offense

The trips formation is a big part of the Kansas City Chiefs offense. On a few occasions in 2017, the Chiefs called a variation of trips in excess of 15 times a game. Andy Reid used this formation to isolate their All-Pro tight end, Travis Kelce, on the inside of the formation. With receivers spread out from sideline to sideline, Kelce is afforded an abundance of space with a two-way go on any release he takes, without having to worry about the sideline as an added defender.

How the Philadelphia Eagles' slot fade play became so effective

The Philadelphia Eagles offense features a unique blend of West Coast passing concepts and modern spread offense principles. This gave the Eagles the best of both worlds and placed them on the cutting edge of offensive football. Specifically, the use of the slot fade concept gave the Eagles one of their most efficient third-down calls in 2017.

During Pete Carroll's dominant nine-year stint at USC, the Trojans’ offense was one of the most explosive offenses in college football history, particularly in the passing game. Carroll's offenses were in the top 10 in passing touchdowns six of the nine years Carroll was there. One unique concept that stood out to me as particularly effective was their “Sluggo-Win” concept, which became a favorite among several USC quarterbacks.

With Dwayne Haskins under center, the Ohio State Buckeyes have altered their focus on offense in 2018. Haskins is the definition of an “NFL Style” quarterback. This term is a bit outdated, but the old school definition fits Haskins. He has the ability to go through an entire progression from the pocket, and consistently deliver an accurate, on time pass.

Here are a few different ways Ohio State has featured Haskins’ skillset in 2018.

Advancements in the Passing Game

There are few passing game experts that have a better understanding of the intricacies of offensive football than Dan Gonzalez. Based near Dallas, Texas, Gonzalez has authored several cornerstone books in the coaching library. He remains on the cutting edge of the evolution of the passing game. As a consultant to numerous schools across the country, it’s his responsibility to scour all available resources to have answers in his arsenal.

How the Philadelphia Eagles have utilized the Mesh concept

Throughout the Chip Kelly era in Philadelphia, the Eagles frequently utilized a mesh concept that a good chunk of the NFL now uses, too. Kelly and Pat Shurmur, the Eagles’ offensive coordinator at the time, revived an old concept that Mike Martz and the St. Louis Rams of the late 90s and early 2000s also used.

How the Philadelphia Eagles enhanced the running back swing screen

The Philadelphia Eagles have historically had good success with swing screens. In the 2015 season, the Eagles ran variations on this concept 21 times for 162 yards, averaging 7.7 yards per play. Let's take a look at a few of the their swing screen concepts. When facing defenses in single-high alignments, the Eagles would run the swing screen with a backside slant/flat combination.

When doing a study on the efficiency of two-point play calls, one play that stood out as particularly efficient was the follow concept. When running the follow concept on two-point attempts, NFL teams converted 8 of 11 times (72.3 percent). When looking through my cut-ups of the play, I watched several teams with a variety of playing styles have great success with it. This article discusses several of the variations of the scheme.

The “All Curl” route combination is one of the simplest plays in football. The San Francisco 49ers, under the direction of Kyle Shanahan, will use this concept frequently in 2018. Shanahan will typically feature the route combination out of a trips set.

Through the past three seasons, Kyle Shanahan has found unique ways to get his skill players the ball in space. Out of trips, the farthest receiver from the quarterback (No. 1 receiver) usually doesn’t get targeted much. In fact, they get targeted so little that some defenses are designed to leave a corner on an island with that receiver.

How Andy Reid's shallow cross package could work for you

Traditionally, Andy Reid’s offenses have been viewed as efficient ball-controlling passing attacks (the definition of West Coast). The 2017 Kansas City Chiefs version kept true to this mantra, but also added an emphasis on the vertical passing game, which makes sense as one of the best players on their team, Tyreek Hill, might be the fastest player in the NFL. One of the ways Reid did this was by implementing different versions of the Shallow Cross.

Consider using these plays from the University of Memphis passing game

The University of Memphis football team’s offense ranked fourth in the nation in total yards in 2017 with 6,719 yards and averaged 532.1 yards per game. Head coach Mike Norvell runs one of the more interesting offenses in the country. He had a few exceptional athletes including quarterback Riley Ferguson and wide receiver Anthony Miller, but the Tigers’ offensive success was predicated on creativity, aggression, and synchronicity.

Memphis didn’t run a dink-and-dunk offense. The Tigers attacked defenses vertically with well-designed pass concepts. Ferguson, who is expected to be drafted in the NFL this year, had a big arm and wasn’t shy about throwing the ball downfield. Let’s take a look at a few of their pass plays that you could add to your playbook.