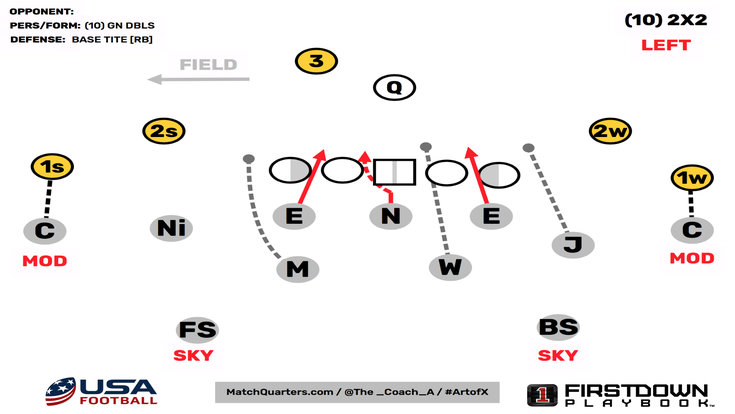 As you make final preparations for the upcoming season, here are some thoughts on coverage trends that were seen and clinched discussed in the time leading up to the season. The resources here are as valuable for the offensive coach as they are for the defensive coach. The details provided, including both the weaknesses and the intended use, provide valuable information.

Cover 7 is part of the quarters coverage family. It is a two-high split field coverage concept where defenders distribute routes tightly, running with receivers, even across the field in their hip pocket. This version of quarters allows a defense to bracket certain receivers. This article details the tools within the coverage as well as how to install Cover 7.

Invented by Nick Saban as an answer to defend against four verticals with a one-high safety, the Rip/Liz is a Cover 3 match concept when defending offenses in 2x2 formations (11 or 10 Personnel). This article details dividers, techniques and coaching points for each position.

Match coverage is like the popular Rip/Liz concept with a few important distinctions. This article focuses on the finer coaching points of this coverage as well as addressing common ways offenses attack it. It also covers the front structure paired with the coverage in the even as well as run fits.

How to Understand Saban’s Rip/Liz Coverage

This article provides a detailed explanation of what Rip/Liz is and how it is utilized to defeat common route concepts. Video and diagrams provide the details necessary to understand this coverage.

This article takes a detailed look at “Soft Sky.” The coverage still allows the Seahawks to play with speed and free of the paralysis of thought, but it compensates for one inherent weakness of three-deep, 4-under concepts. It also attacks the tendencies offenses lean on when faced with single-high looks. Diagrams and video accompany this explanation.

In a regular Cover 3 scheme, the corners are responsible for the deep third part of the field on their respective sidelines and the free safety is responsible for the deep middle of the field. Teams can pick this scheme apart with underneath three-step passing concepts to take advantage of all of the space underneath. In the Redskins’ Cover 3 squat (name created by the author of the article), the corners actually squat in the intermediate part of the field and the free safety backs up and has to help on any deep routes like a safety in a Cover 1 does. Diagrams and articles detail this coverage variation.

How the Washington Redskins play their unique Cover-3 squat coverage

Cibolo (Texas) Steele High School, bases out of a press-two coverage. Cover 2 Read takes away the things that usually attack Cover 2 like smash, fade-flat and slant because of the rules and techniques that the corner is taught to play. Cover 2 Read allows a defense to align versus different formations and continue to stop the run. Remaining sound on the back end, especially against offenses like the air raid, it also gives the defense the ability to stop the run and have answers for the immensely popular RPO offenses.  This article is a preview of a Coaches Note and illustrates the concept with video.

The defensive front that has drawn the most attention in the past year has been labeled the “tite” front due to teams tightening down the front by playing a 4i-0-4i. The RPO game and perimeter passes have been a major reason for this breakthrough. Defenses need a way to defend the inside run game while still defending the pass threat of the RPO. This is where the tite front is useful. The defense uses four defenders to fill the inside gaps and spill the ball outside on the perimeter to where the seven other defenders are defending the pass.

Why Defenses are Tightening Down the Interior of their Defense

Learn why defenses are tightening down their front on defense and how they are doing so.

Setting the Nose in the Tite Front

One of the most important pieces to playing the tite front is how to play the nose guard. Should he “lag” on the center’s block or should he “lead” on it and play the frontside A-gap? Learn the how and why here.

Learn How to Defeat the Tite Front

How to Play the Tite Front from Single-High Safety Principles

When most people think of the tite front, they think of split-field coverages or even Iowa State’s now popular three-high safety defense. Learn how a Division I defensive coordinator utilizes the tite front from single-high safety structure and how he does so.

Match quarters: Cody Alexander takes you into the nuts and bolts on how you can move to a three-down odd front.

Army – one of the toughest defenses in the country last year – made a living out the tite front. Learn how they did so and held Oklahoma’s high-flying offense to a mediocre performance.

Learn how to defend all of the “Y-Off” run game you see in high school and college football using the tite front.

How to set your front in match coverage to still be gap sound.

Simulated pressures involve four-man rushes that look like a blitz/pressure because a second-level defender (i.e., linebacker or defensive back is rushing) while a defense lineman, or outside linebacker, drops into coverage. They generally confuse blocking schemes and quarterbacks as someone from the second level rushes while the defense plays coverage with seven defenders.

Barry Hoover discusses this popular, yet simple, field simulated pressure with Cover 3 behind it.

Clemson often confuses quarterbacks by blitzing a linebacker and dropping a defensive end into coverage. Clayton Cason discusses how the Tigers do it.

Defensive assistant for the Louisiana Ragin’ Cajuns discusses simulated pressures and how they utilize them.

The Dark Side: How the Army Black Knights Successfully Bring Pressure With Fewer Defenders

Army consistently got pressure last season while bringing less defenders than usual like a blitz. Brady Grayvold details how they do it.

Double A-gap pressures involve two linebackers walked up into the A-gaps by the center. This changes the way offenses pass protect and generally changes how many players will stay in to protect. This allows the defense to dictate to the offense and puts immediate rushing threats in the closest gaps to the quarterback (the A-gaps).

NFL defensive coordinator Mike Pettine discusses various double A-gap looks and how he has utilized them over the years. Whether that be by dropping out and playing normal coverage or by blitzing and playing various coverages behind it.

A Grade “A” Defense: The Minnesota Vikings and their Third Down A-Gap Pressures

The Minnesota Vikings and Mike Zimmer are known for their patented double A-gap looks and pressures. Brady Grayvold takes you into detail on how they do it.

Seth Galina talks about how double A-gap looks dictate offensive pass protections and different pressure schemes to run off of the look.

Fire zone pressures involve a five-man rush with six defenders behind in zone coverage. These are often popular with the common “3-Deep 3-Under” coverages. It is a safe way to blitz while playing zone behind it.

Anatomy of Pressure: How the Penn State Nittany Lions Led the Country in Sacks

Learn how Penn State led the country in sacks through their various blitz patterns that involved some creative fire zones.

Manny Diaz, one of the godfathers of the fire zones, heated opposing offenses up last year with Fire Zones. Learn how the Miami Hurricanes led the country in TFL through fire zone blitzes.

Defensive coordinator at Lindsey Wilson College (Ky.) discusses boundary blitzes and how he has adjusted them to ensure good zone coverage behind them while still creating pressure.

On the “Deep Dive on Defense” podcast, owner of the blog “Blitzology” goes over different blitz patterns and how to do it.