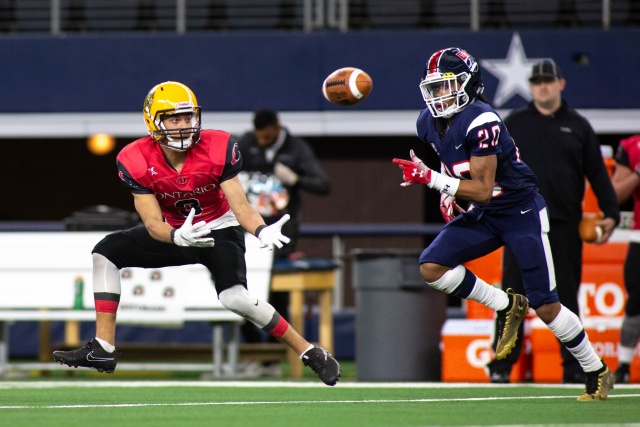 This past offseason we were fortunate to have former college coach/current pro/college receiver instructor Drew Lieberman share details of the tools that are important to receivers. This article curates his articles, which are supported by the video “teach tapes” that Coach Lieberman created.

Every wide receiver at every level should practice stance and start every single day and take pride in doing so. Create a game-like picture in your head, visualize a job that you will be assigned on game day and explode out on the snap. Practice that process over and over again and never get bored of it.

Here’s a process for teaching the catch.

It is often perceived that blocking in space at the wide receiver position is simply a battle of wills between the receiver and the defender he’s assigned to block. Although the first step to becoming a great perimeter blocker is the desire and willingness to block, it is the technical details of the art of perimeter blocking that make up great run blocking wide receivers. As a coach, it is useful to break down the mechanics of run blocking into tangible concepts that the players can buy into when executing each play.

Details on teaching the skills of blocking in space here.

More important than a wide receiver’s pre-practice routine is his everyday rituals. Routine is a sequence of actions that is regularly followed. Ritual is a series of actions that is regularly and invariably followed. In other words, routine is what the players are used to doing before practice. The rituals are priorities that must be accomplished every single day, without fail.

At many high school and college programs, student-athletes arrive to practice directly after class, making it difficult for some players to dress, see the trainers and make it to the field in time for a full pre-practice warmup (this is generally not an issue at the higher Division I level college programs). To combat inconsistent pre-practice arrival times, it’s useful for receivers to have a checklist of rituals each day that can be completed after practice but must be finished before leaving. This also allows pre-practice time for any new installation or assignment review that is often necessary during a typical game-week practice.

Having a plan at the line of scrimmage is probably more important than any other aspect of wide receiver play. The best wide receivers have mastered the way they talk to themselves at the line of scrimmage before the ball is snapped. This includes visualizing their job within the play call, analyzing the defensive alignment as a whole and then assessing the leverage and body language of the defender directly over them. There’s a lot of information that can be gained in just a few crucial seconds, and it’s imperative that this thought process is efficient, which takes practice.

Here's a method to create a plan for receivers.

The essence of great route running lies in a player’s ability to adjust his route to win vs. any coverage. The finished product is a combination of practiced techniques that a receiver uses at the exact right time to attack the defense. Before he can execute these techniques, he must first be able to diagnose what’s in front of him and create a plan. The best way for a receiver to recognize coverages is by focusing his time identifying a “coverage triangle,” which is the relationship between the cornerback, safety and linebacker closest to him.

Learn how to teach the coverage triangle.

An initial key for beating loose coverage is making every route and every blocking assignment feel the same to the defensive back off the ball. It is much harder for a defensive back to run the underneath routes when the receiver is taking off the ball with the same pace on vertical routes, quick-game routes, running plays and everything in between.

The keys to beating loose coverage are shared here.

Press releases are the scariest aspect of wide receiver play for coaches because there is no way to predict exactly how the defensive back will react, which makes it impossible for a coach to tell the receiver exactly what to do in a given situation. Teaching breakpoints, catching mechanics or hand combat is much more comforting because there are precise techniques that can be practiced the same way every time and applied to very specific situations. For example, a 12-yard curl requires a tight break at the top, every single time no matter what. Press releases can’t be thought of so strictly.

Beat the press release with these strategies.

The hitch route: considered by many coaches and players to be the “easiest” route to complete in football, it’s also a staple of many high school and college spread offense systems and cannot be taken for granted. When a hitch is called, the goal is to gain “free yardage” by taking advantage of the vacant outside flat area that the defense gives up when they play loose coverage.

The hitch is similar to a free throw in basketball – the best players and teams are able to take advantage of these “free” opportunities rather effortlessly. However, that only comes as a result of taking pride in practicing these simple scenarios over and over again and seeking to execute at a level close to perfection. A key to making this steal is to properly execute the “drop, pop breakpoint.”

A truly great route runner has the ability to adjust his route to any coverage or any alignment he sees from a defender. To do this, he must have the proper tools at his disposal (a collection of practiced techniques) and also a great understanding of when to deploy these techniques to get himself open.

The “speed drop” break point is so useful because it allows the receiver to change direction and break at a 90-degree angle rather instantly anywhere from 10 to 20 yards downfield. Once the receiver is comfortable with the footwork, this break point gives him the freedom to pair it with change of speed, hand combat or a violent hip shift, providing the receiver with tools to win vs. any look he sees.

Learn more about the speed drop.

The “square break” is designed to allow a receiver to change direction at a sharp, 90-degree angle on any in or out breaking route under 10 yards. “Drop, break, line” is the three-step footwork pattern that will become rhythmic and second nature to the receiver over time.

Learn to teach the square break.

As discussed in last week’s article, teaching press releases can be difficult because the coach can’t predict how the defender is going to react on each play. Thus, rather than teach specific movements that only apply to specific situations, it is better to give the players rules and concepts to live by that can apply to all press releases. The specific footwork and movements at the line of scrimmage will come after the player understands the broader commandments that he must follow on each rep.

The slant route is a fun route to coach because it can win vs. any coverage. To maximize the potential of using slant routes, the receivers must be given a lot of freedom to use different strategies and techniques to win and those strategies must be practiced often. As long as the receiver is able to create some separation and win across the defensive back’s face in time for the quarterback to deliver the ball, the methods of doing so are nearly endless.

Learn the details of the slant here.

Keith Grabowski was joined by Drew Lieberman, founder and CEO of the Sideline Hustle, live from USA Football’s 2019 National Conference. The Sideline Hustle is a platform that breaks down wide receiver technique and shares tools for wideouts around the country. Coach Lieberman shares his leap of faith to creating this platform, its growth and the results the organizing has experienced thus far.

Keith Grabowski is joined by Drew Lieberman, founder and CEO of the Sideline Hustle. Coach Lieberman shares his thoughts on creating a culture for wide receivers and how to improve daily in the offseason, specifically in the summer.

Learn a plan for summer here.