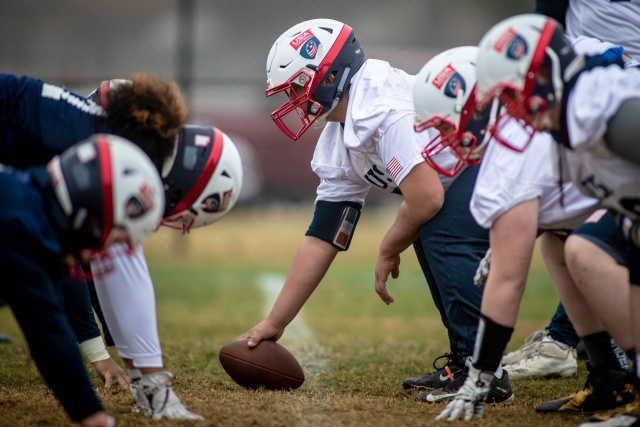 Coach Tom Bass identifies a simple scheme to use as a starting point for teaching young offensive linemen to block.

Using the hips is fundamental in offensive line play, yet it is one of the skills that seems to be hardest to develop. This article illustrates a progression for teaching the use of the hips to help win leverage in a block.

Many times, the pace and demands of the season take the focus away from fundamentals and continued skill development. Utilizing a bye week or intentionally pulling back a little to focus on fundamentals can be very productive in helping the offensive line succeed in the later part of the season.

Coach Bedenbaugh shares his philosophy of putting in quality work and focusing on daily improvement rather than winning a national title.

Coach Steve Ciocci, shares the importance of great pass protection and his four keys to success.

Make Sure Your Equipment is Helping You Develop Technique

Coaches of offensive linemen always look to use the tools available to them.  Evaluating the equipment that is available against the skills that are being taught can show some gaps in what is desired and what the equipment is reinforcing.

Freshen Up Your Drills

For a long time, offensive line development focused on only the weight room as the major factor for improving. With an evolution in the teaching the skills of contact and blocking, linemen can work year-round to develop their skill on the field without having to use any football equipment.

A Work on Your Own Plan for OL

Linemen develop in different ways because of several factors, including their role in scheme, their level of experience and even body type. This article shares ideas on using an individualized approach to both in-season and offseason offensive line skill development.

A coach’s job is to know his players. Coach Wylie’s approach to how players develop as well as a few ideas on utilizing that understanding to create better practice plans is discussed.

Sam Parker, offensive line coach at Division II national runner-up Ferris State, learned an effective method for developing players from newly named New York Jets offensive line coach Derek Frazier. Coaches always stress the importance of getting mental reps to players when they are not in a play or drill, but few have defined exactly how that is done.

For this former NFL offensive linemen, it is all about respect. The approach to the game is important, and he shares his mindset in this article.

What Texas OL Coach Herb Hand Looks for in a Lineman

Herb Hand joined the Coach and Coordinator podcast to talk about a wide variety of topics. One of those topics was what he believes are the most important attributes to succeed as an offensive lineman. Those are shared in this article.

State champion Rich Alercio explains the importance of keeping the offensive line unit sharp mentally. He shares his method for doing this year round.

Fit Your Scheme to Your Personnel

Offensive line is a highly technical position. Fitting the scheme to personnel is as important as it is to fit a quarterback into a system. This article presents a thought process for defining what the strengths and weaknesses of personnel are and how to maximize talent.

Like other positions, a successful offense is built upon teaching the concepts of the play in a way which the players have a strong understanding of how the scheme works. This article illustrates a progression for learning in the zone schemes.

The down block is effective in many schemes. Here is an effective and safer way to teach the down block at any level. It emphasizes removing the head as a blocking surface and allows the offensive lineman to have answers for both a penetrating and reading defensive lineman.

How the Gallop Technique Works

The gallop is an offensive line run blocking technique. It is a Bill Callahan and Larry Zierlein staple (among others) that is used to close ground more quickly than traditional footwork in the running game. It requires an explosive drive out of a two- or three-point stance with dynamic weight transfer from the outside to inside leg moving laterally or at a vertical angle to gain ground and fit on a defender in tight quarters. Detailed explanation and analysis video is included in the article.

The Backside-Drag Hand in Outside Zone

The backside, or “drag,” hand on the front side of outside zone is a critical component for covered offensive linemen to accomplish their block. The technique has been heavily taught by the likes of Texas OL coach Herb Hand, former Broncos OL coach Alex Gibbs and Redskins OL coach Bill Callahan.  The article explains the technique and variations, including video analysis.

In the running game the jump hook technique is basically another way to reach, hook or pin a defender inside when the runner has an outside track. This article shows the details and includes video analysis.

Teaching the Square Pull for Traps

The square pull is the classic trap pulling style, done by opening the play-side foot away from the line of scrimmage. This article covers footwork and fit as well as a progression for teaching the square-pull technique.

On the backside of running plays, particularly outside zone, offensive linemen are tasked with executing a cut-off block to deny the pursuit angle of defensive linemen at the first level or linebackers at the second level. The article focuses on utilizing the slingshot technique to cut off a defensive lineman. Detailed explanation and video analysis is included.

How to Win Back a Stalemate Situation

Learning to properly use leverage helps win the block in situations when a stalemate occurs. The technique is explained in this article.

How Offensive Tackles Keep Edge Rushers on Their Toes

The drill helps players to improve footwork and teach offensive linemen the correct way to set up for a kick-slide pass protection. The initial kick-slide is then followed by a change of footwork for a lateral slide in order to handle any potential stunts. Drill setup and key coaching points for the drill are within the article.

The purpose of this drill is to focus on the offensive line’s accuracy of the hand strike during pass protection. Drill setup and key coaching points are explained.

The Art of the Strike: Three Techniques Offensive Linemen can Use to Fend Off Pass Rushers

The snatch-and-trap technique is used by offensive linemen in pass protection as a counter to pass rushers with uneven weight distribution. Defenders who have too much weight in front of their body don’t have a proper base of support to stabilize their frame, which causes them to be susceptible to the snatch-and-trap.

These articles discuss how offensive line participation in multiple sports can build their athletic skills and help them play in the trenches.

A Background in Wrestling Proves Beneficial for Linemen

These articles highlight the lessons that linemen have learned from the game.

Having a grading and feedback system for your players is important for both their learning and motivation. Retired college coach Tony DeMeo recently shared his “Four Aces” system of player grading. This is a system he utilized with all positions over the course of his career, and it offers a thorough evaluation system for the offensive line.

A simple, objective solution for how to grade and evaluate offensive linemen

Today’s coaching climate demands complete transparency between players and coaches, including answers that are more black and white than gray. While the media has for decades talked about “quarterback controversies,” any position can turn into a controversy without an objective system for naming starters and slotting backups correctly. This article outlines a simple system for grading practice and games to ensure that the best five players for the job are on the field.

You Need Objectivity in Measurables

Former CFL Lineman Angus Reid was impacted by his coach Dan Dorazio. The excerpt explains how Dorazio evaluated the performance of the offensive line. It provides a great example of motivation created by effective evaluation.

On the podcast, Johnson talks about the importance of culture, evaluating and celebrating the offensive line and using the scout team, among other topics.

In this episode, Coach Hand talks about how he builds a culture with his offensive line, what he looks for in a recruit, how to create work- balance and much more.

John Strollo is not your typical line coach. You will hear about vectors, circular force, levers, fulcrums and many terms that sound scientific, but as explained by Coach Strollo, they just make sense.

To this day McNally is active in coaching in his yearly retreat as well as the ever-popular C.O.O.L clinic. Though he has spent years developing his craft as a coach, he is constantly looking for innovations in offensive line play. Currently he consults for the Cincinnati Bengals. His knowledge of offensive line play is second to none.

Jason Eck discusses the importance of making decisions as a family and how his commitment to his family inspires his players.

Ashfield and host Keith Grabowski talk about his playing experience, coaching overseas and developing as an offensive line coach.

Division III leader in pass protection, Lewis talks about how to protect the quarterback and offensive changes.

Patterson discusses how to help players take ownership of the learning process, making the most of positional meetings and why coaches — not players — should be on the hook when a player makes a mistake on game day.

Host Keith Grabowski and Coach Parker discuss the Bulldogs’ offensive success, importance of involving all the players and how Coach Parker’s professional skill set helps him develop his players. Included in this is his strategy for gaining the mental rep.

Coach Leonard gives insight on his culture for his unit at Duke. He shares ideas on technique for blocking the backside of the power scheme.

Jack Mewhort discusses methods that were most effective from his perspective as a player as well as offensive line play and technique.

In this podcast Reid highlights what the game of football does for young people and the everlasting impact he received from his coach in the CFL which, Keith believes should be a coach’s ultimate goal.

Coach Rose, whose expertise lies in offensive line play, breaks down his approach to coaching the offensive line, including building from your established scheme, creating drills that benefit your team’s specific approach on game day and why true player confidence comes from preparation, not pregame speeches.

In this episode of the USA Football Coach and Coordinator podcast, Keith Grabowski is joined by Coach Dan MacKay, head coach at Burlington (Mass.) High School. Grabowski and Coach Mackay discussed how Burlington increased their rushing offense this past year and improved as a football team.

Teach offensive linemen to work in unison in order to reach second-level defenders.

Teach offensive linemen how to properly execute a double-team block against a defensive lineman using the "getting skinny" technique.

Teach offensive linemen how to defend a second-level stunt.

Teach offensive linemen the footwork needed to turn the kick-slide pass protection into a lateral slide to handle defensive stunts.

Teach offensive linemen how to properly execute a hand strike in pass protection.

Teach adjacent offensive guards and tackles how to block a two-man stunt.

Teach offensive lineman to come to balance and pass block without a helmet to remove the head from the block.

Work on the pass blocking technique of your offensive linemen by stressing hand placement and footwork, specifically their set and punch with this drill from the Miami Dolphins.

Miami Dolphins offensive linemen practice a set and punch pass blocking drill that coaches at any level of the sport can teach their players.